Boardtracker is a search engine and reporting service for threaded discussions.  Recently, the BoardTracker folks implemented a visualization of author activity overtime that was inspired by work Fernanda Viegas and I did in 2003/2004 called “AuthorLines”.

AuthorLine visualizations represent the weekly rates and nature of contribution from a single author over the span of a year.  Each vertical strip of bubbles represents the activity of that author in a week.  The 52 strips of bubbles in these images represent a year of contribution history.  If users reply to threads other users initiate, they get blue bubbles that  sit below a middle dividing line.  Each thread to which they contribute in that week is represented as a separate bubble.  Each additional message contributed to that thread in that week adds to the size and transparency of the bubble.  If the author initiates new threads, they get a red bubble that sits above the line.

The results is an “at-a-glance” view of the pattern of participation for a year in the life of a threaded conversation message contributor.  The two images below illustrate just how different contributors can be in their patterns of engagement in a threaded conversation environment.  This image represents a contributor of mostly reply messages who starts a small amount of thread initiation at the end of the year but who contributes significantly more to threads started by others.  They have a habit of engaging in lengthy discussions, adding dozens of messages to one or more threads almost every week of the year. 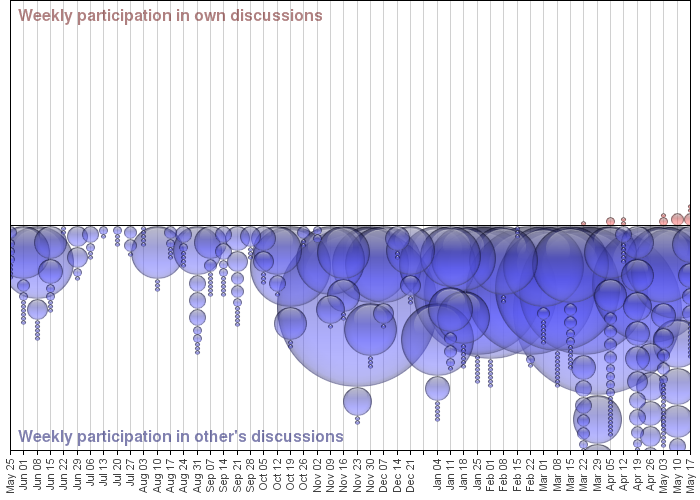 Contrast this image with the distinct pattern created by this author who heavily initiates new threads while responding to those started by others more modestly until the pattern inverts at the ned of the year where they shift to a more heavy reply rather than initiation pattern. 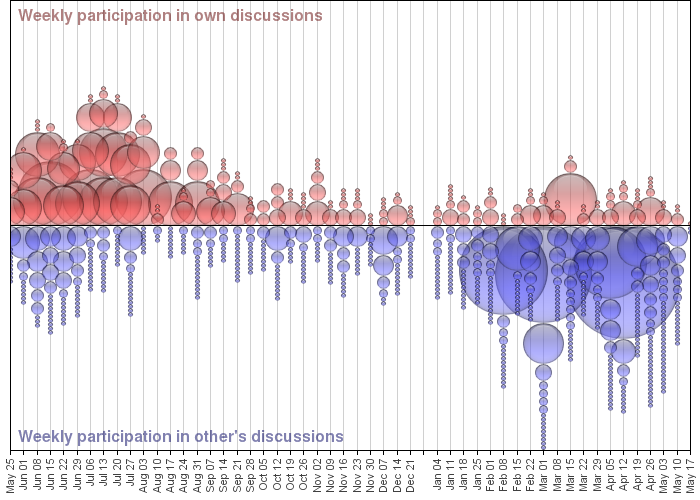 The paper that described the early work on these visualizations can be found in the HICSS 2004 conference:

A related paper applies these visualizations to document the range of variation found in social media spaces built around threaded discussions.

2010AuthorLineBoardtrackerMayThreaded ConversationVisualization
Subscribe to our Newsletter
Enter your email to get regular updates about Social Media Research Foundation, NodeXL, events, tools, and news.
Links
Upgrade to NodeXL Pro!!
Your support keeps our projects, like NodeXL, active and strong.  Please contribute.