A recent paper makes use of NodeXL to create illustrations of data from connections among twitter users drawn from the United States presidential debates in October 2008.  One illustration highlights the major clusters in the network. 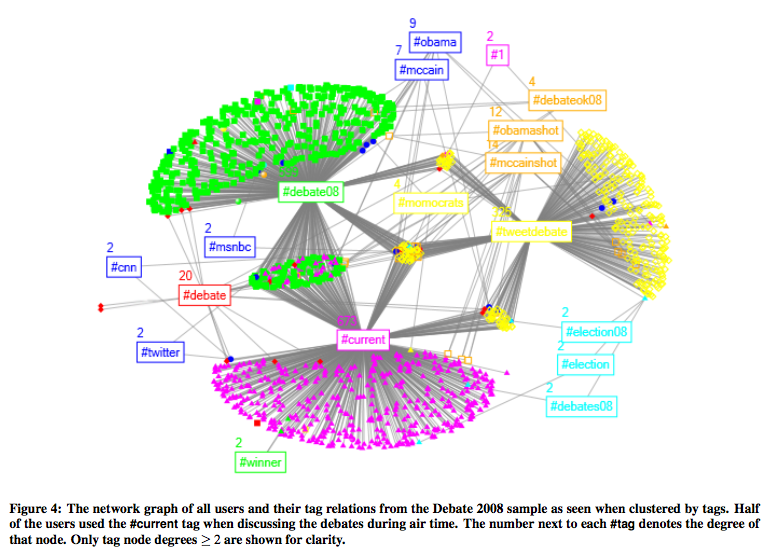 Abstract:
We investigate the practice of sharing short messages (microblogging) around live media events. Our focus is on Twitter and its usage during the 2008 Presidential Debates. We find that analysis of Twitter usage patterns around this media event can yield significant insights into the semantic structure and content of the media object. Specifically, we find that the level of Twitter activity serves as a predictor of changes in topics in the media event. Further we find that conversational cues can identify the key players in the media object and that the content of the Twitter posts can somewhat reflect the topics of discussion in the media object, but are mostly evaluative, in that they express the poster’s reaction to the media. The key contribution of this work is an analysis of the practice of microblogging live events and the core metrics that can leveraged to evaluate and analyze this activity. Finally, we offer suggestions on how our model of segmentation and node identification could apply towards any live, real-time arbitrary event. 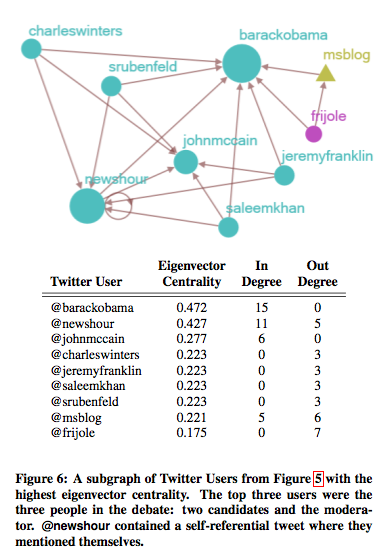 At the core of the network are the entities that have the most “eigenvector centrality” which turn out to be the major participants in the debate.

AnalysisChartgraphLinkMediaNetworksNodeXLSNASocialTieTweetTwitterVisualization
Subscribe to our Newsletter
Enter your email to get regular updates about Social Media Research Foundation, NodeXL, events, tools, and news.
Links
Upgrade to NodeXL Pro!!
Your support keeps our projects, like NodeXL, active and strong.  Please contribute.